Your Two Minds by Mark Manson

Close your eyes. Wait, don’t close them yet. Finish reading this paragraph, then close them. OK, close your eyes and try to think about nothing for 30 seconds.

Wasn’t easy was it? Chances are that various thoughts and images kept popping into your head.

Now, I want you to try the same exercise again, except this time I want you to pay attention to which specific thoughts and images pop up. Try to keep track of them. Notice them, note what they are, and then let them go. See if you can do that for a minute.

What were they? Maybe that fight you had with your brother the other day. Or the assignment that’s due tomorrow, but you’re reading this instead. Or maybe a movie you saw recently, or some sort of fantasy.

Chances are you were able to notice them for a little while, but then you quickly find yourself getting sucked into thinking about them involuntarily.

If you’ve ever meditated, even a little bit, you’re familiar with the experience you just had.

You closed your eyes and tried to shut your mind up, even if for 30 seconds, and despite your best efforts the spigot of thought vomit just kept pouring out.

If you’ve ever attended meditation retreats or been involved in some movement such as Zen like I was for a while, they talk a lot about this “mind chatter” that you suffered through.

And the thing is, that “mind chatter” never stops. It’s always going on in your daily life.

A lot of these eastern philosophies aim to “quiet” that chatterbox of a mind that we have, and I suppose it’s useful to put a little damper on it.

But I’ve actually found practicing these sorts of techniques have another benefit, a benefit psychologists are just catching on to and starting to write about here in the West.

That benefit is what I call the “Two Minds.” When you close your eyes and try to eliminate any thoughts (and fail miserably like the rest of us), obviously your mind is thinking.

But if your mind is thinking, then who is observing the mind thinking?

It was your mind watching your mind.

In Zen they refer to this as the “Thinking Mind” and the “Observing Mind.” The two minds.

It’s been a common concept in Buddhism for centuries, and new western therapies such as Acceptance-Commitment Therapy (ACT), are catching on to how useful it is and how it can solve a lot of our every day emotional problems.

I’ll break down the Two Minds further and then show how they can be applied to solving many of the emotional problems we deal with in our everyday lives.

The problem with the Thinking Mind is that we don’t completely control it.

Don’t believe me? I’ll prove it.

OK, not only did you picture a big pink elephant with a blue umbrella, but you were watching yourself think about a pink elephant while you were reading the past two paragraphs.

The Thinking Mind is always chattering away while you’re waiting in line, while you’re in bed trying to sleep, when you “tune out” of conversations with people, or when your mind wanders while reading (which I’m sure will happen at least once with me… asshole).

If our Thinking Mind starts obsessing about reaching level 30 in Diablo or the last episode of Mad Men, our Observing Mind is helpless to reign it in.

Most of our psychological and emotional stress happens because our Thinking Mind and Observing Mind are “fused” and we don’t recognize the difference.

The answer: you don’t. You can’t control your Thinking Mind. Those emotions pop up and will continue to pop up.

The trick is to not fuse with those emotions when they arise.

It may seem like a subtle difference, but try it. Think of a time recently when you felt a negative emotion, a lot of anger or nervousness or insecurity.

Now, instead of thinking, “I was angry at my brother,” think instead, “I felt anger towards my brother.” You HAD anger, but you weren’t controlled by the anger.

Emotions are not a choice. Behavior is.

People ask me all the time, “How do you deal with being afraid of failure?” or “How do you not worry about being rejected?”

I feel the same fear and worry anyone else does, I just don’t identify with it. I accept it and move on despite it.

For instance, when I have to sit down and write a lot (like writing this), I often get nervous. I want to write something really great because I know thousands of people are going to read it.

One result of this nervousness is procrastination.

When I was younger and I was in situations where I got nervous and procrastinated (e.g., a big term paper in school), I would decide, “I can’t do it because I’m too tired,” or “I can’t focus like other people, I must have ADD or something.”

This was me being fused with my Thinking Mind. There was no separation between my emotions and my identity.

I felt nervous and had a thought of “I can’t do it for X, Y or Z reason,” and I accepted it at face value. I was a slave to my Thinking Mind, tugged by its leash.

These days I’m often able to sit down and write 5,000 words or more in a single day. I still feel the same anxiety. I still hear the same thoughts (“I need to eat first,” “I should take a nap,” “I’m not in a writing mood right now.”)

But now, instead of identifying with these thoughts, I acknowledge them:

And then I turn to my Thinking Mind and promptly tell him that he’s full of shit and that I don’t need a damn thing except to sit my ass down and start writing.

We all produce excuses and negative emotions involuntarily. Guess what? That’s NEVER going to change.

I don’t care how many positive thoughts you conjure, what kind of therapies you do, or what kind of New Agey spiritual crap you come up with – negative thoughts and emotions are natural products of the human brain.

You can’t get away from them. None of us can.

What you CAN do is accept them. Defuse from them. And then act despite them.

When people come to me ask how to “stop feeling angry,” or “stop getting nervous,” this is their problem: As soon as you try to eliminate a thought or emotion, you make it stronger.

As the Buddhist saying goes: “What you resist will persist.”

Or as Tony Robbins says: “You feel what you focus.” The more you focus on an emotion, the more powerful it becomes. Thus, negative emotions are like quicksand, the more you struggle to get out of them, the further into them you sink.

The trick is to accept them and then let go. This is a skill and it is a process, but it cannot be practiced until you recognize that there are two minds and you only control one of them. Here are some exercises you can do that will help you separate your two minds and therefore take more control of your behaviors despite your thoughts and emotions.

Language is very powerful. Disidentifying from these emotions and thoughts in this way does two things: 1) implies that they’re temporary states, and not permanent conditions; and 2) forces you to take responsibility for them. They’re nobody’s fault, they just are.

2. Thank your Thinking Mind for negative thoughts and emotions. This is a technique from ACT and it is effective. It may sound absolutely nuts, but it’s effective because it FORCES you to accept your negative emotions instead of fight them.

“Thank you, Thinking Mind, for feeling nervous before my date tonight. It will keep me on my toes!”

“Thank you, Thinking Mind, for being angry at my boss. I really appreciate how much you care.”

This is going to feel really bizarre – expressing gratitude towards negative emotions. But I think you’ll find that it diminishes the power of the thoughts and emotions over time and actually impels you to take action despite them.

3. Finally, if you find yourself in the heat of the moment, or if there’s something that’s really nagging at you, try this out.
Take something that’s bothered you recently and hold it in your mind. Maybe it’s your girlfriend nagging you. Maybe it’s being terrified of talking to that cute girl in class next to you. Maybe it’s quitting your job.
Distill it into a single sentence, such as, “I feel afraid of quitting my job.” Or “I feel irritated with my girlfriend.”

Now close your eyes and imagine Bugs Bunny saying it, while chewing a carrot. Then Mickey Mouse saying it, while dancing and doing cartwheels. Pretend the Chipmunks are singing it to you in the form of a Christmas carol.

Now, turn it into an image, maybe your angry girlfriend, or your broke ass sitting on the curb. Put that image on a television screen. Make the colors funny, give yourself a polka dotted suit. Make your girlfriend’s hair into a bunch of candy canes.

Make the thought look and sound absolutely ridiculous in your mind. Take your time and play with it. Try to make yourself laugh.

After you’ve done this for a minute or two, stop. How do you feel?

Chances are you feel much better about it and the negative emotion isn’t nearly as potent as it was before.

Separating your Observing Mind from your Thinking Mind is a habit that takes practice. But once you begin to do it, you’ll feel yourself becoming less and less of a slave to your thoughts and your emotions. You’ll take more control of your internal daily life and feel better about it.

In my opinion, this is the single most important step to developing self-discipline and acting despite whatever neuroses or mental hang ups you may suffer from.

Once you’ve differentiated your two minds, you can begin to evaluate your thoughts and feelings from an objective place and decide which ones are helpful and which ones are hurtful. 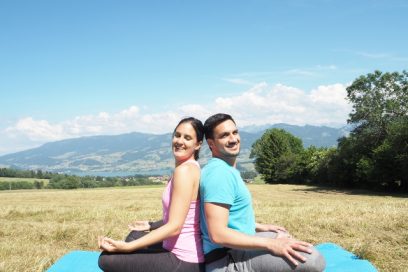 What is a Mudra exactly? Let's practice Mudras together! A Mudra (sanskrit word meaning sign… 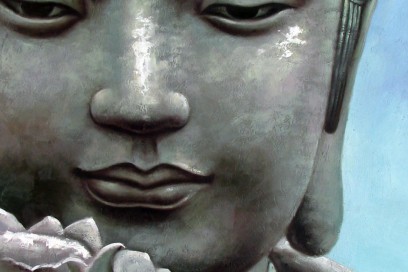 One day, the Buddha sent a group of monks into the forest to meditate. In…